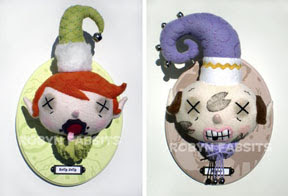 Holly and Jingles have shown up on Plush Yous blog. It looks like they all arrived safely. I'm always so nervous when I mail work out. I go crazy at the post office paying extra for insurance and confirmation of delivery. I worry till they get to their destination. Better safe than sorry I guess.
Again these are for sale at Schmancy in Seattle.
Posted by robyn fabsits at 9:45 PM No comments:

Email ThisBlogThis!Share to TwitterShare to FacebookShare to Pinterest
Labels: Plush You, schmancy

I finally got a store up and running on Etsy. It only took me 9 months since I signed up for it. I've had a few people inquire about work for sale. I don't have a lot of work laying around and I don't specifically make plush to sell online. I'm super with work for shows I just can't find time to make more. Though I'd love to, I wish there were two of me. I just happened to have a few older pieces(1.5 yrs old) in my studio that I'm willing to part with. My shelves are getting crowded and I think these guys need a new home. I'll try and upload new work to Etsy whenever I can. I'll definitely sell any work that doesn't sell at gallery shows when I get them back. When I have new work to sell I'll make a post here to let people know. I created a link to the right on my blog for easy access.
Posted by robyn fabsits at 9:05 AM No comments:

Email ThisBlogThis!Share to TwitterShare to FacebookShare to Pinterest
Labels: etsy

I've been working on these elf heads on plaques for about 2 weeks now. These guys will be available at Schmancy in Seattle. They will be in the mail this afternoon. I was working like crazy this last weekend to get them done so I wouldn't have to worry about anything over the Thanksgiving weekend. It will be nice to take a little break. Which is good and bad. Good because it forces me to take a break from my sewing machine, bad because I'll be thinking about everything I could be working on. However I might get to finish the scarf I started about 3 months ago.
So each elf has a little story about their demise. Here's Holy Jolly's story (red headed elf) and Cinnamon's story (blue elf) 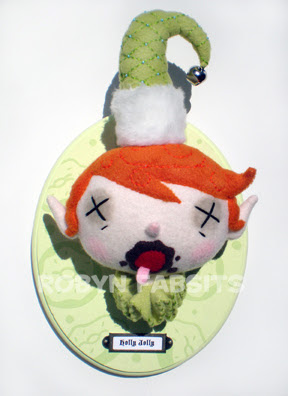 Holly Jolly loved the donuts,
Powdered, glazed and fried.
She loved to eat them up until
She choked on one and died. 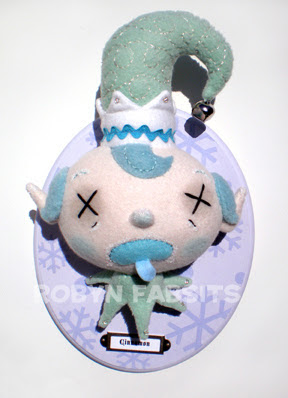 Cinnamon had the most red head of hair,
And his cheeks, pink and rosy it’s true.
On the ice he would play
‘Till the day it gave way,
And now he’s a pale shade of blue. 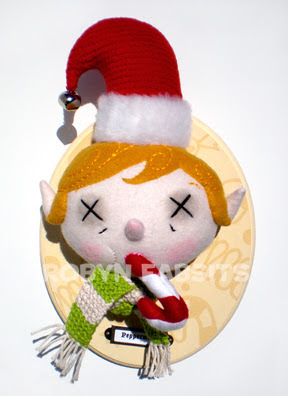 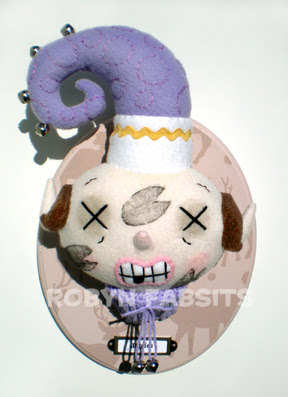 Yeah! Thanks to everyone who voted for Jack in the Nightmare catagory for the Holiday Softies Award over at Softies Central. There was a lot of great work and I feel honored.

I've been very busy working on four pieces right now and that is why I haven't posted much in the last week. I want to finish them all before I show you what I've been working on. That way I can explain it all at once. So hopefully by the weekend I can get some good pics and make a post.

I've also been cleaning up my studio and have a few older plush pieces laying around that never sold and need a home. I think I'm going to open up an etsy account and try and sell them. I've had a few emails from people asking if I sold any of my work. Look for this in the next week or two. I'll make a post about it when I have it all set up.
Posted by robyn fabsits at 9:43 PM No comments: 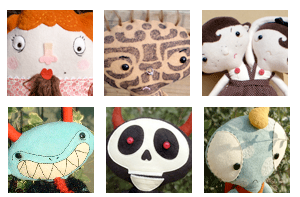 I tend to get bored with my website about once a year and decide to change the look of it. Yesterday was that day. It's not drastically different but I did add a column to the right that will post any upcoming events and what not. I decided to change my header and colors here as well so that everything is cohesive in look. So same content, new look. Enjoy!
Posted by robyn fabsits at 11:58 PM No comments:

Email ThisBlogThis!Share to TwitterShare to FacebookShare to Pinterest
Labels: portfolio 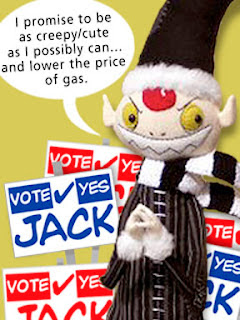 So the fun thing people like to do is to send out their plushies on an ad campaign. It's a lot of fun seeing what people will post. You can check mine and everyone elses at the Softies Flickr group. You can check mine out at my Flickr account. More to come.
Posted by robyn fabsits at 4:14 AM No comments: 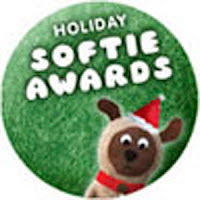 Awesome!! Jack is nominated for the Holiday Softie Awards
in the Nightmare Before Christmas Catagory. For those who don't know that catagory means creepy/cute for the holidays – Halloween and Christmas. Please vote for Jack here. You can vote through noon on Tuesday Nov. 13th. He would greatly appreciate it!!! 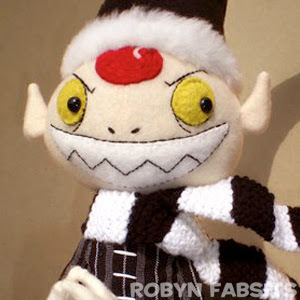 Posted by robyn fabsits at 9:53 PM No comments: